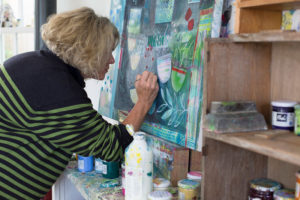 ‘It is the mystical in nature which draws her and which she seeks to capture.’

Lesley Seeger was born in Newcastle Upon Tyne in 1958 and spent her formative years in rural Northumberland, Scotland and  North Yorkshire.  Her early memories are of  the wild Northumbrian coast and landscape and the physical freedom of a 1950s childhood.  She now lives in a small village near Castle Howard called Huttons Ambo which is nestled in an area of outstanding natural beauty.  Inspired by the natural world she works  outside  painting en plein air and completes paintings in the studio. Working on up to seven pieces at a time, each body of work includes both landscapes and semi abstract florals whose styles and methods inform and compliment each other. She is to be found, most of the time in the middle of a field with a wheelbarrow full of paints and canvases.

Nature is the main inspiration for Seeger’s work and an an exploration of the emotional impact of colour is central to her creative practice.  As a colourist ,she is influenced by artists such as Gillian Ayres, Howard Hodgkin, Elizabeth Blackadder, and Ivon Hitchens.  It is the mystical in nature which draws her and which she seeks to capture.  Always closely observed from nature and then completed in the studio, her work becomes a hybrid between the real and imagined, the seen and the felt.

She paints in acrylics, onto Birch ply, preferring the technique of painting straight onto the board rather than sketching first on paper. In this way the entire history and process of the painting is contained within the finished work. As acrylics dry quickly, they suit her many layered paintings. Areas are constantly erased and re-applied to create a story and patina.

Seeger exhibits regularly with York Open Studios and Cambridge Contemporary  She has work in public and private collections both at home and abroad.