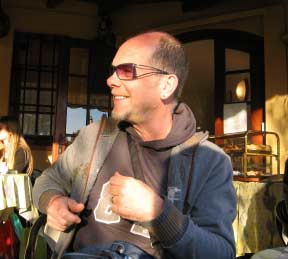 Painting and music have been competing but now increasingly complimentary passions in John Donaldson’s life. Although drawn by the emotional potential of music, John chose to make his living as a painter. Over forty years his colourful, figurative work has lent more and more towards Impressionism – an art movement that he feels is far from exhausted even after the passing of more than a century.

Today he directs his impressionist tendencies to the portrayal of fleeting light and weather effects. This, together with a general desire for greater spontaneity has meant that he has started to move away from the larger studio pieces towards smaller, more expressive works. These are more akin to the ‘live’ studies that were used to develop the studio work earlier in his career. He says, “Over the years, my sketches, studies and field work in general have become more ‘abstract’ in appearance. I suppose the more intuitive and personal marks made at the time helped me to remember not just the details of the subject but the feelings evoked by it.”

John’s subjects have ranged from his early years’ painting on the South Downs, the Ouse Valley and the streets of Lewes – via London’s Thames, Cornwall, Devon and Dorset – to a more recent preoccupation with the Midi of France, Brittany, the Cote d’Azur and the Italian Riviera. He says, “I have a list of images yet to paint, as well as themes to revisit, enough to last a lifetime. Another lifetime.”

Further connections between music and paint are explored these days exploiting a condition, which John has had all his life, known as Synaesthesia. This condition – gift – some would even say affliction – makes involuntary connections in the mind between sounds, colours, smells, words and numbers. These connections or resonances vary from person to person – common agreement is rare.

John is relating familiar and much-loved images with musical themes and realising them in paint. These he refers to as Improvisations – a nod to the fact that both organ playing and jazz demand improvisational skills more than any other musical forms.